imagination and “the interview”

Many of you may well now be starting your field work. And at least some of you will be conducting interviews. 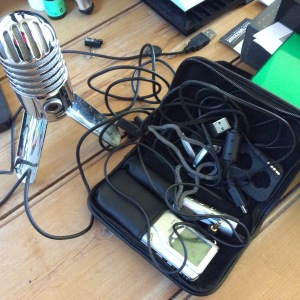 That’s an interesting word – “conduct”. One definition of conduct is simply “to organise and carry out”, so to organise and carry out an interview – and that’s probably what research methods texts mean when they say, “conduct” an interview. Another meaning of conduct is “ to lead or guide” someone – as in to conduct a guided tour. And this meaning often applies to the research interview because you want to guide the person through a set of topics, perhaps even questions, that you have already determined. The other meaning of “conduct” – the way in which you behave yourself – also features in interviews. You do have to focus on your own conduct – how to choose the place and time of interview, how to introduce yourself, how to make the interviewee feel relaxed and comfortable and so on.

These conduct matters are all important considerations in interviewing. You do have to think about them. I say that they are necessary –  but hardly sufficient. I reckon that too much focus on technique and on all the precautions around interviews means that sometimes the fact that the interview is a conversation between two people just slips by.

An interview is so much more than a set of technical and ethical considerations.  An interview is an opportunity for a researcher to listen –  and to imagine. Maxine Greene sums up the starting place for the interviewer:

If others are willing to give us clues, we can look in some manner through strangers’ eyes and hear through their ears. That is because of our cognitive capacities. Imagination is the one that permits us to give credence to alternative realities. (Greene, 1995, p 3)

So, according to Greene, an  interview is an opportunity to imagine the realities and experiences of another person. How it is to be them, to have their life, their opinions, their beliefs and understandings? What is the logic that underpins what they are saying and have done? How does what they say extend and challenge what you already ‘know’ ?

Greene points out that the exercise of imagination in interviews doesn’t just happen post hoc – in the analysis. It happens in the here and now of human interaction. It’s in the moment and in-between the interviewer and interviewee that meaning is first made. An interview is therefore above all about listening very carefully, and responding to three things – what’s said, what’s not said and the silences.

So here’s the danger. If you go into an interview with a list of questions that you must cover, and then focus really hard on trying to remember the order of the questions and what can’t be left out, then the interview will proceed as a Q and A sequence. You will be so focused on what your interviewee has to answer next, that you may well fail to hear something that is actually really important.

Indulge me here. Let me get a bit empirical about what a beyond-technique approach to interviewing means.

Here is a small extract of a focus group interview with ten year olds. The interview was about an art project they’d been involved in. However, the conversation wandered around a bit. The two adult interviewers – I was one and my long-term co-researcher Chris the other – let this wandering go on, we didn’t intervene. And then this happened…

Child 2: It’s hard to get your own ideas onto your paper because people are shouting out their ideas and it’s hard to like think yourself….

Child 1: If someone likes it quiet so they feel more spacious and like when it gets dead noisy and things and you’re like in a corner like in a corner and it’s all loud and noisy, I don’t like it.

Child 3: I like it when you can just escape to wherever you want to go…

Because we were listening carefully, we were able follow these comments up at the time. We gently pursued the children’s experiences simply by asking for further examples. This led to a lively discussion about different kinds of lessons. The conversation then looped back to the art project, which, as it transpired, was a prime example for these children of a “spacious” classroom experience. It is unlikely we would have heard any of this if we had stuck to a set list of questions and got anxious when it seemed that our focus group had gone off piste. Instead, by listening and being in the moment of the conversation,  and imagining as we listened, we heard something that was really important to us – the equation of communal and very focused work with a sense of openness and spaciousness.

Because we were listening carefully we were also able to imagine some of the larger social processes that produced these experiences. We could consider the kinds of teaching methods that routinely produced feelings of being left out, voice-less, and hemmed in. We could, and did, pursue connections between teaching practices and the senses and bodies in classrooms –  partly by focusing on openness and partly by looking for instances where children felt physically hemmed in and silenced in the question-and-answer format of the conventional lesson. This was really important for us to generate new understandings of the ways in which’ inclusion/exclusion’ is produced by fairly standard teaching approaches.

So – what does this example mean for the practice of interviewing? Well this. Good interviewers open a conversation and then follow a thread almost seamlessly, using their imaginations and empathy. You can see this kind of effortless interview sometimes on television and hear it on radio. If you watch more experienced researchers at work you will see them get the information that they want – and more besides – with apparent ease, with minimum difficulty. This surface easiness belies the actual intellectual and imaginative, affective work that is going on.

But this kind of empathetic imaginative interviewing is not something that comes naturally. It takes practice. Concentrating on what is being said – at the same time as retaining the important issues that you want to cover, and responding to what is said – is something to be learnt, over time. It doesn’t come straight away.

This is a scary thought if you are new to interviewing and if the interviews are high stakes, crucial for your research. Well, despair not. There’s a solution. If you are about to head off for a set of interviews, do try them out first on your loved ones and friends, several times if possible, in order to make sure that you know your agenda and it doesn’t get in the way of responding to the person you are interviewing with your mind, senses and emotions.

Remember. Your interviewees are not upright, breathing data-in-the-making. Treat the interview as a conversation and an opportunity to imagine and you never know what will eventuate.

2 Responses to imagination and “the interview”