This is a guest post from Mark Carrigan, Research Fellow at the Centre for Social Ontology: socialontology.org, The University of Warwick and Digital Fellow at The Sociological Review: @thesocreview. Mark tweets at @mark_carrigan and has recently published Social media for academics.

The prospect of laboriously crafting an online image is probably somewhat off-putting. It’s certainly a recurrent theme in critiques of social media and the digital narcissism it is said to engender. However it doesn’t have to be a time-consuming process. Reflecting on how to present yourself online is helpful because it’s the most immediate way of addressing broader issues of online identity. While there’s more to online identity than what you happen to put in your social media profile, it’s nonetheless the case that this is the aspect of your online identity over which you have the most control. However having said all this, it’s cer­tainly possible to find yourself wasting time cultivating a profile when you’re supposed to be doing something else. So be wary. 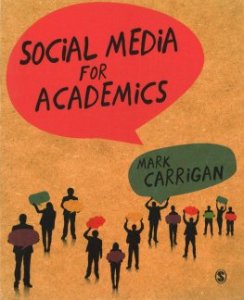 The choices available to you largely function within parameters defined by the services you’re using. In other words, there are only so many things you can customise. But the clearer you are about the story you’re trying to tell, the easier it will be to do something interesting within these limitations. For instance, con­sider Twitter. Obviously there’s a limit to how much information it’s possible to fit in a Twitter profile. That’s why it’s necessary to decide what information is most important for you to present. For instance, if you’re primarily concerned with meeting others working within your area then foregrounding your research interests makes sense, being much more specific about them than might other­wise be the case. For example ‘interested in sociological accounts of asexual identity’ as opposed to ‘interested in asexuality’. Furthermore, it’s hard to tell a story in 160 characters.

But it is possible. My favourite example of this comes from Yanis Varoufakis, the economist who is Finance Minister of Greece’s SYRIZA government at the time of writing. As he describes himself to the world, ‘Economics professor, quietly writing obscure academic texts for years, until thrust onto the public scene by Europe’s inane handling of an inevitable crisis’. He literally tells a story with his Twitter bio, introducing himself as a thoughtful man happily toiling away in relative obscurity until circumstances conspired to draw him into the public sphere in order to deal with the self-evident failings of the political class. Many of his 727k followers, as of 12 April 2016 will, no doubt, reject this analysis of the political scene in Europe. But he leaves them in no doubt about where he stands. Of course, it’s much easier to tell a vivid story if your work has carried you into the epicentre of the unfolding history of Europe. But this isn’t a reason not to try anyway.

The powerful thing about telling a story is that it gets beyond the level of sim­ply listing facts about yourself. Not that there’s anything wrong with this; in a way it’s like a story because you choose which facts you present and the order in which you present them. But telling a story places them in a wider context, giv­ing meaning and direction to things which people come to know about you. Nonetheless, listing facts is important. Yet what sort of facts are likely to be rel­evant for these purposes? Here are some suggestions:

Personal websites are more challenging because websites are obviously more text-orientated, though the importance of images should not be overlooked in a digital culture which has clearly taken a visual turn in recent years. Personal websites provide more of an opportunity to tell a story about yourself and what you’re doing. This opportunity can itself be challenging though and perhaps that goes some way to explaining why the branding consultants Alice Marwick examines in her book Status Update thrive in the way that they do. Even though I sneer a bit, one suggestion offered by them that Marwick discusses could prove potentially useful if you’re struggling to know what to write:

The final exercise might be taking this too far. But the others could prove useful if you’re struggling to get started on presenting yourself on a website bio. Another way to approach this is to search the websites of academics you know or know of. How do they present themselves online? What do you like about this? What do you dislike? Are there things that surprise you? Are there things that you suspect may be misinterpreted? What do you think they’re trying to convey? These are all useful questions to develop a sense of what sort of self-presentation online feels right for you. By trying to articulate your reactions to other people’s online identi­ties, it’s much easier to develop a sense of how you want to enact your own.

However the visual element to these matters is important. It can be tricky to get a social media profile to look right and the effort involved in doing so can be a potent source of procrastination. Many people have tried to capitalise on the concern people have with the aesthetics of their social media presence, though this can actually create a new problem because there’s so much unsuitable mate­rial to sort through in order to find something useful. Search for ‘Twitter headers’ and you’ll see what I mean. But within this range of material you’ll find websites offering free images that can be used in your profile. The quality of these varies, to put it mildly, though it will likely be possible to find suitable images if you look through a selection of those available. However this obviously raises the question of what would constitute a ‘suitable’ image. To a certain extent, it could just be one you like. If you find an image that pleases you to look at then why not use this as your header photo? For instance, for a long time I had a Tetris-style image as my header photo which I liked because it reminded me of, unsurprisingly, Tetris. It didn’t have any academic significance and to the best of my knowledge it didn’t reflect some aspect of myself which I felt was key to my identity. It was just an image that I stumbled across which I thought looked appealing as a header on my Twitter profile. That said, it’s possible that some of the things you think look appealing might not be similarly regarded as such by others, so while I’m suggesting that you should just choose something that you like, it’s worth being cautious about anything that could possibly cause offence.

There’s no obligation to use a profile picture of yourself on Twitter, or any other social media platform for that matter. However it’s worth considering what practi­cal purposes such a picture could serve. It makes it easier for people to identify you at conferences (though perhaps this could be a reason not to have one) and helps someone you’re already acquainted with to confirm it’s you when encoun­tering you online. It also creates an impression of you in ways that might prove important but then so too might its absence.