Linda posted a quotation from Judith Butler on Instagram before the day began. This was a key to the idea we were to encounter. 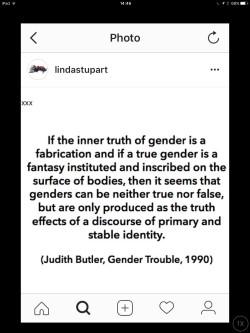 Billed as drag day, all of day two activities addressed the notion of gender as performance, and explored how this might be achieved.

We began with a circle of sound activity – passing noises around, raising and lowering their intensity. This ‘brought us into the room’ and actively focused our attention. Travis explained that when they use this kind of activity with kids, it signals that what is to come will also be active and involve minds/bodies.

We watched two drag performances – one by two members of pecs and the other by Victoria Sin. We also watched film by/of Victoria. We were able to ask questions of the artists about what they did, why and how it felt. 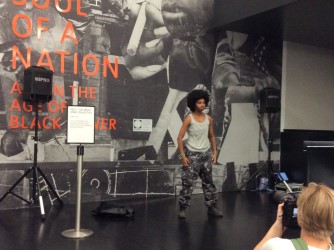 Pecs, an all women collective, use drag to explore masculinities and patriarchial structures and practices. Their aim is not to pass as men but to use hyper-masculine characters to make social and political comment about gender. Pecs often perform as cabaret with comedy and live performance. However, we watched two serious, very emotional lipsync performances in the gallery, together with members of the public.   We saw and heard how becoming drag king involves modifying body stance, movement, expression, tone – the alter ego allows for messing with gender. 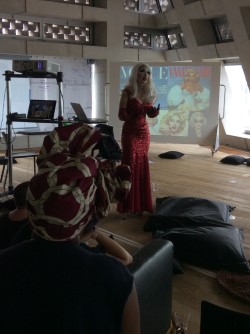 Victoria Sin adds to her body to become sinforvictory, a performance of white Western femininity. Exaggerating the familiar ideal female form presented in moving and still images is not an act of misogyny, but rather exposes how gender as a performance hides, creates anxieties and is exploited by profit. We were asked to think about what we add and what we hide when we perform gender on a daily basis.

We went with sinforvictory to the gallery to choose a work which said something about gender that was meaningful to us. We then used makeup, wigs and bits of cloth to augment our usual selves. We then took pictures of our augmented selves next to the art work we had chosen.  As this was in the gallery, with audience, we had to consciously consider the experience being an object of/for public display. 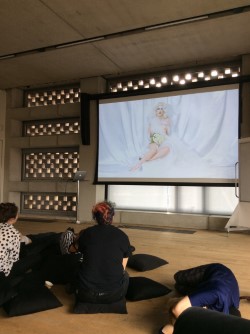 of the day we discussed how drag might be used in the classroom – drag allows for children and young people to play with gender, and see it as amenable to continued choice and change.

We then worked on the timeline, using polaroid snaps, emojis, questions and comments to record our responses to drag day. 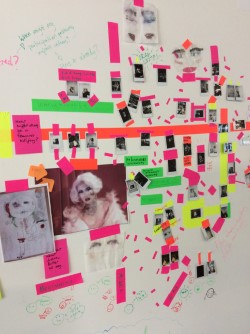