This is a guest post from Karen McAulay, Music and Academic Services Librarian and concurrently Postdoctoral Researcher at the Royal Conservatoire of Scotland.  Karen has worked in the Whittaker Library at RCS  since 1988.  She is a Fellow of the Chartered Institute of Library and Information Professionals. Karen graduated with a PhD in Music from the University of Glasgow in 2009.  Her book, Our Ancient National Airs: Scottish Song Collecting from the Enlightenment to the Romantic Era, was published by Ashgate in March 2013.

In October 2012, she embarked upon a 3-year AHRC-funded project at Glasgow University, seconded as part-time postdoctoral researcher to the Bass Culture project looking at accompaniments in Scottish fiddle music.  Between October 2015- April 2016, Karen was awarded an Athenaeum Award by the Royal Conservatoire of Scotland, enabling her to commence part-time research on her new project into the Stationers’ Hall music collection at the University of St Andrews, and her research role has since been extended until August 2018.

At 21, I went to Exeter as a postgrad. I did a research Masters there, changed topic for my PhD, and ran out of time because I started a postgraduate librarianship diploma instead of trying to complete my thesis first.  In fairness to myself, I did get the job and the pension-plan that I had decided were a priority.  At the time, I couldn’t imagine myself as a lecturer, so putting my research to one side felt sad, but not a tragedy.

If you had told my 24-year old self that I’d start another doctorate part-time alongside a full-time job, with three sons and a husband traipsing through my “study” (an alcove in the dining-room) at regular intervals, I don’t think I’d have believed you.  Adjusting to the realisation that I was no longer a PhD student had been at times uncomfortable, but I now had other priorities.  Indeed, I was a church organist as well as a librarian, and I even took up writing light fiction as a remunerative side-line, until the boys came along – life wasn’t dull. 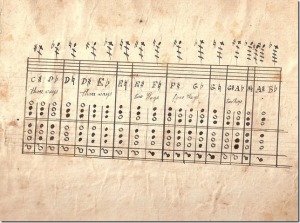 However, finding three old flute manuscripts in an old cupboard at work revived my interest in research, and one thing led to another PhD.  By now aged 46, I chose a completely different topic that I considered relevant to one of the courses offered at my workplace, and using resources that would be geographically easy for me to visit as a part-time student.  I was also incredibly lucky to find a great supervisor at the university on my doorstep.  Fitting in supervisions was something that had to be carefully planned around my work, but I regarded my trips across the city as a distinct advantage.  Studying at a different institution to my own workplace meant I was able to separate my dual identity as full-time librarian and part-time postgrad, and I found that very helpful.

There are many different routes to getting a PhD these days.  Whether you’re studying full or part-time, you may well seek paid employment of some kind.  If you choose the work to fit in round your research, then obviously it’s nice to find something that will benefit your CV, whether it’s teaching, admin, lab-work or some other relevant activity.  Some people will be fortunate enough to find creative work, or work that’s a complete contrast to the research.  However, when you’re fitting in research around an existing career, then the work choice has already been made, and the big decision is in committing your “spare time” to research.

Working full-time, you’re always conscious that your PhD is what you do in the time that’s left over. It is as important to you as it would be to any full-time researcher, but you can’t allow it to impinge upon the day-job.

In my case, with a family as well, shopping and domesticity were also something of a priority at weekends. You can’t concentrate on doctoral thoughts when new school shirts, swimming lessons or piano practice are clamouring for attention!  And I was still a church organist. That paid my uni fees.

I had five years in which to complete my thesis. This time, personal pride meant that non-completion wasn’t an option.  In my last year, I signed up to Academic Ladder just to get myself a support group, and logging my progress forced me to be accountable. I had progress charts and deadlines pinned up beside my computer; online shopping became the new normal; and because my husband had two knee replacements that summer (one before thesis submission and one before the viva), I paid a gardener to tidy the garden. Neither of us was in a position to do it!

Do I make it sound like a hard slog?  Let’s be honest, any PhD is hard work. It’s hard work if you devote three full years to it, and it’s hard work if you spread it over five years and fit it in around the day-job.  I think I’ve always been fairly organised, but multi-tasking my work, a family and a PhD certainly helped my time-management skills.  It also demonstrated that I have quite singular determination when I really want to do something! 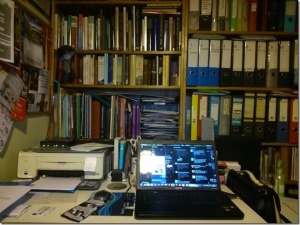 It has also been good for my self-esteem.  After I’d abandoned the first PhD, the most painful thing was the gradual realisation that I had been considered capable of doing it, but hadn’t lived up to my potential.  It’s disappointing to realise that you’ve sold yourself short – there’s no glory in being a Ph without the D.  Successfully finishing the second PhD meant that I could finally put to rest the ghost of the first.

And the truth of the matter is that I loved every minute. I loved, and still love immersing myself in research.  I never doubted that I would finish it, and it has genuinely been life-changing. It hasn’t made me richer, but it has certainly opened up many interesting opportunities, and offered me the chance to get involved in further research projects.  Once, I couldn’t see myself lecturing, but now my CV is full of conference papers, and I’m in the middle of studying for a PG Cert in teaching and learning.  And once, I took pride in having published 30-odd magazine stories and a serial.  Now they take their place after a book and a quantity of scholarly articles.  I’m very good at narrative!

If I do have a regret, it’s that I didn’t do my PhD sooner, but common-sense reminds me that I did establish a career, have three children and get them all started in primary school before the time was right for research again.

Part-time doctoral research? It may not suit everyone, but it certainly suited me!