There was no Wednesday. Well, there was, of course, but I wasn’t at it. I had to go to a meeting in Manchester so I couldn’t be in both places at once.

Having to miss a day of field work, especially when it only happens once a year, is awful. But missing out on some of the action in your chosen site is often unavoidable. That is why I’ve chosen to mark my non-research day with a post.

Why absent? Sometimes it happens you are unwell and can’t be out and about infecting other people in the name of generating data. However, in my case I clearly had a choice about whether to attend a meeting two hours away on the train or not. I decided to go because the meeting was also a once a year event, and it was with a funder… need I say more? And because this was my fifth summer school and I felt that maybe it wasn’t completely crucial. We shall see…

But not-being-there, being away from having around creates a problem for the researcher, and I guess, a simultaneous opportunity. How will I find out what happened on Wednesday? I have the timetable. But that is really just a starting point… 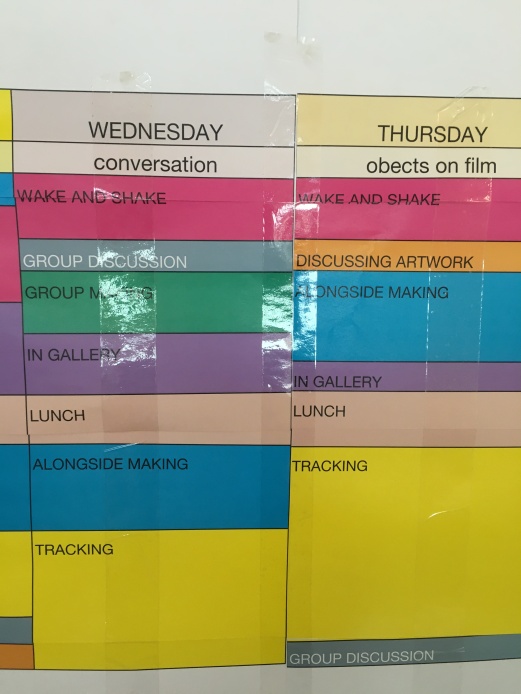 Well, I have to ask of course.

But I also have to look at the group – are they talking differently, relating differently. working in different groups? I also need to find the traces of their activity – objects, films – to see what has changed since Tuesday. I have to find out what has happened to some of the ongoing discussions – is it art, is what we’re doing art, how do the one and the many come together when making. I have to see what further complexities have been added to the play-with-formal-shapes (Monday) and the practices of performance and camera that we were immersed in (Tuesday). And I know that Anna and Alex want the group to start to direct action in the latter half of the week so Wednesday was an important transition. What did this look like?

So Thursday will be just a little bit frantic as I try to catch up, attempt to get some sense of what went on – as well as engage fully with the programme.