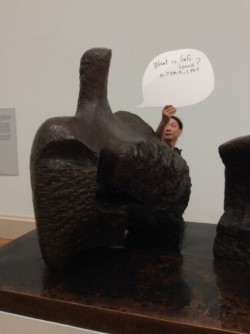 Today we moved to Tate Britain.

We began the day in the Henry Moore room, surrounded by ‘bodies’.

After a noisy warmup, Travis introduced a quick ‘question answer’ exercise, where groups of four worked to produce speech-bubble question and answers drawn from our previous three days’ experience.

These Q and As were
then ‘attributed’ to Henry Moore sculptures.

This activity told us that today we would engage with the Tate Britain collection in playful/serious ways. 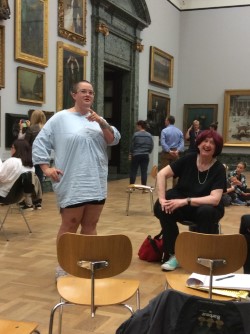 moved to the pre-Raphaelite room where Roz Kaveney, a writer/poet/critic and trans activist, talked about queer texts, and queering texts. Roz explained that:

Science and fan fiction genres are attractive to young people as they are already part of their everyday cultural experiences. 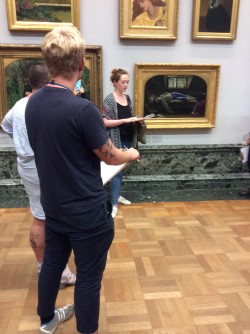 Linda then invited us to queer a pre-Raphaelite painting of our choice – imagining it as illustrating a new story we invented, or seeing it as a cartoon frame for which we had to write the next move. We were to write against the grain of the most obvious gendered reading of the work. We then moved around the room, reading aloud these ‘messing’ texts alongside our chosen picture.

In the afternoon, we visited the Queer British Art exhibition. Travis and Linda asked us to consider five questions as we moved through the rooms: (1) what language was used in the curatorial explanations, (2) who was represented, (3) who was next to who, (4) who was marginally present or missing and (5) what would young people we teach understand about queerness from the exhibition. We also had time to spend time with a particular work or selection. 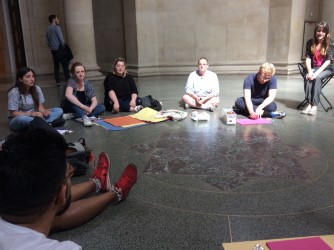 We then explored our responses to the exhibition through both discussion and making. Many of the group focused their responses on gender variant affirmative activities – dancing and gender euphoria being two.