I was recently emailed by an early career researcher. She wanted some advice on how to find a mentor. She was isolated in her own institution. She felt awkward about just bowling up to people at conferences, but realised she’d probably have to try this as nothing helpful or supportive was forthcoming at work.

I understood the problem and wondered just how widespread it is. While doctoral researchers can expect some support – at the very least contact with their supervisor – the newly appointed lecturer or research fellow can find themselves pretty lonely in their new posts with no-one to ask for advice. This is not a situation I’ve been in, although providing programmes for ECRs has been part of my own institutional responsibilities. I know about what universities should do, but not what an ECR might do if they don’t even try. I imagine being an isolated ECR might be a bit like being stuck on a stoney beach in stormy weather… you seem to be stranded here, where to turn, what to do… 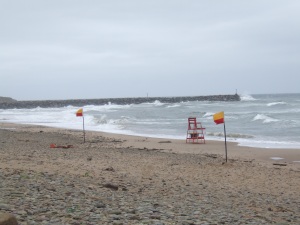 I decided that I needed a bit of help with the emailer’s question.

I put out a couple of 140 character queries to the twitter hive-mind to see what others thought. Two people echoed the concerns of the emailer, suggesting that this was not an individual problem. One said, “Its especially difficult when ECR in alien faculty” referring to her own social science disciplinary base and that of her STEM faculty. The second commented, “I only wish I knew (being that isolated ECR). People are so busy. It seems impossible to ask.”

@canhoto I got some great advice from someone in another faculty – some things are not discipline specific
@comprof – attend workshops/peer presentations and network. Ask for suggestions or ask those whose work you admire
@lewisgdean Learned societies, even if there is no formal scheme, there may be willing people
@MaryFChadwick I’d see if any relevant academic societies have mentoring schemes. And maybe investigate contacts in other departments too
@cath_fletcher – external examiner was very helpful. Worth thinking about when you pick
@ProDavidAndress conferences journal articles. Pick people, then ask. Most academics flattered to be thought experts
@andrewking2904 ask your friends, supervisor and PhD examiners. Also set up a project with clearly defined outputs and invite them
@daniellambach Out: Attend topical conferences and workshops. The smaller, the better. In: email people, invite for coffee + ask for advice
@mccook from my MA experience, just ask. Was flabbergasted at how friendly and enthusiastic other academics were
@DiscourseofEd: use conference opportunities to meet a couple of key people in your field and explain your challenge of isolation
And when you read a paper that you like, send the author an email and explain how their paper is useful in your work.
@MeganJMcPherson peer mentoring, collaboration/cooperation interactions to build mentoring relationships over time, expanding circles of mentors
@Clarrysmith take opportunities by attending courses/conference etc but then stay in touch with people via social media
@nomynjb Im not isolated per se. sessional. I email anyone relevant who’s ever given a speck of help and attend a SIG unit until noticed, eventually have worn down a couple ☺
@DrHelenKara Err.. .Twitter ? my answer to everything ☺ How I advise them depends on their sector and the nature of their isolation Suggestions would include affiliation (for non-acad), with PhD, looking for relevant free/low cost seminars workshops locally eg run by uni, twitter @TheSRAOrg
@EmmaHead2 I got a mentor by emailing a colleague in a different faculty at same uni, we had attended the same seminar paper. Ask for initial meeting, be clear on what wanted – advice, help with progress/target setting, and for how long- one year?

I’m hoping that at least one of these might resonate with my emailer.

But the email and the twitter responses did make me think about what I – as a ‘senior’ academic whose job description implies, if not precisely specifies, mentoring – I would do if someone I didn’t know, someone in another faculty, contacted me out of the blue. I suspect I would be polite but probably not that helpful. As the second twitter respondent noted, I’m pretty busy. I’d be much more likely to respond positively if the person contacting me was someone in my own field and/or in my school. But I’d be much more likely to agree to coffee if the person not in my school of field was someone I somehow knew. I’d chatted to them on twitter. I’d met them at a conference. They’d been supervised by someone I know.

So the twitter advice about following up on casual meetings with people makes good sense to me.

But I also thought that maybe I wouldn’t feel altogether deprived if there was no formal mentoring scheme in place in my institution/faculty/school. I reckon a lot of formal mentoring schemes aren’t worth the time that goes into them. People are lumped together through some kind of administrative process. The assumption is that all mentors are going to be helpful – they don’t need any support themselves. But it’s not easy to know what you are doing as a mentor if you haven’t had time to consider mentoring practices, to talk to other people who mentor and access some of the copious research. There’s often an institutional assumption that mentors just know how to support someone to develop their career, profile and/or publications – and that’s not necessarily the case. I’ve certainly seen the results of such assumptions – institutional mentoring schemes where people got very variable time, advice and support.

This leads me to think that an isolated, but also probably most ECRs, need to find people who are in their field and/or who are known to be knowledgeable and helpful. Just because someone is a good academic doesn’t mean they will be a good mentor. I’m leaning strongly to those twitter responses that talked about the importance of informal connections as the basis for ongoing mentoring. I’m also in harmony with those that suggest that asking people for a coffee is a good idea, and then asking for something specific, which may not be laying out an agenda for a year’s mentoring meetings at the get-go.

But even as I say this, I’m very aware how hard this is to do. It’s hard for the ECR asking for some guidance to summon up the chutzpah. I’m sure it feels a bit like a blind date where there’s a very large fear of rejection and disappointment. And I’m also acutely aware of how difficult it now is for any of we academic oldies to make this kind of giving-someone-a-bit-of-a-hand a priority in our work. It ought of course to be very high on our list of things to do.

What do you think? Do you have other suggestions for my emailer, or for the vexed question of support for isolated ECRs? Or indeed about how institutional support schemes might be improved?