Today intensified the Summer School focus on ‘the archive’ and its means of production, in particular, questions of selection and layers of access. There was also a concurrent line of inquiry and activity around collaboration and documentation.

We were introduced at the start of the day to Felipe Castelblanco, a Bolivian media artist now in London on a Royal Academy of the Arts fellowship. He showed us some of his work; his interest in public space and the public leads to participatory performance pieces that are necessarily temporary. HIs work raised the question of how such work might be ‘archived’. Felipe suggested that artists had to start such ephemeral projects by keeping central to their thinking how an audience far removed from the event might encounter and understand it.

Felipe then showed us a flock of birds – a murmuration – in which the birds move together, leaderless, but as one. We were invited to tape video cameras to long sticks and then to go into the large hall at Tate Britain to practice moving about as a flock, while also videoing our actions from above.

The group then split into three to do three activities during the day –
1. a visit to (some of) the Tate archives on site to see the collections of artists books, books about British art, artists’ materials (the model ships that Turner used, Whistler’s palette and so on), artists’ sketchbooks, letters and diaries… Much of this material is available to the public on request and can be looked at in supervised reading rooms. 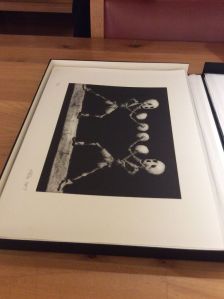 2. the print and design collection. This collection is open to the public, although many items can only be handled by a librarian. The collection of photographs is a relatively recent activity and is indicative of the ways in which gallery acquisition policies change and are open/not open to change. As in the archive, questions were raised about selection of artists – who is deemed worthy of inclusion and who makes that decision? 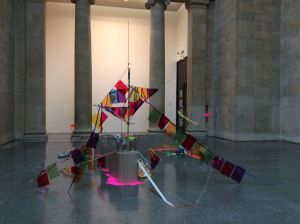 The final group documented the object, it was transitory, and would be cleared away.

We have come in our research to understand objects like this as “a learning work”, where the point of the activity is not the final product but the process – the experience and the discussion. 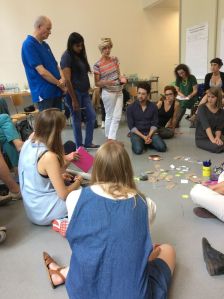 An additional activity occurred after lunch where the whole group came together to build a collective personal archive. Each person took one object which meant something to them, and which had a narrative attached to it. 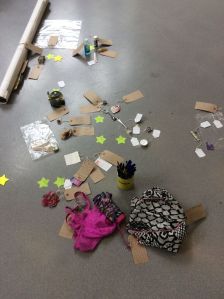 They labeled the object with a luggage tag and wrote some text which was indicative of their story. In pairs they then shared objects and stories. The collective archive of objects was then assembled and the group asked to think and discuss their responses to it as an entity. What characteristics of this archive were important? Discussion focused on the stories and emotions attached to the objects – an emotions archive – and the ways in which editing had already occurred in the selection of the objects in the first place – something that had meaning and a story.

There was also group discussion, some of which focused on the processes of collaboration and the ways in which this kind of activity might or might not be taken back into formal learning institutions like schools and colleges. 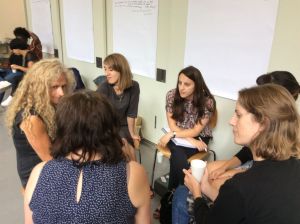 There were varied views on how much freedom teachers could give their students as well as the kinds of restrictions imposed by school leaders and curriculum demands. A good point to end on, and perhaps one which will be taken up on day four?