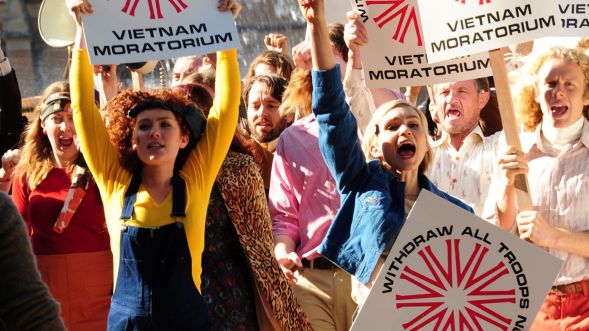 During my protest-filled undergraduate years, there were regular sit -ins – where university offices were occupied – and teach-ins – where alternative interpretations of current events and their histories were explored. University staff and students collaboratively developed a radical curriculum and organised reading lists, lectures and tutorials. Held off campus in cheap and usually ramshackle premises, teach-ins morphed into ongoing study groups and topic-based collectives. They became loosely networked cooperatives, which could re- assemble into one formal teach-in around specific issues. Such groups were often ‘institutionalised’ – as a bookshop selling alternative books and magazines and/or a food cooperative and/or a learning exchange.

These kinds of cooperative alternative organisations existed in many parts of the world. They didn’t really last that long. People had to get jobs, their lives became filled with other commitments. Groups moved out of communal houses and into mortgaged premises of their own. But the legacy of these kinds of organisations can still be seen in many places – there is an alternative bookshop which has just such a history in Nottingham, where I now live.

I first learnt about Australian Aboriginal peoples’ struggles for land rights through teach-ins. Teach-ins were also my first encounter, via home-grown translations, with the big French social theorists. And teach-ins were where I first understood alternative education, not as a middle class choice for a bohemian few, but as a small space where different experiences and knowledges might be shared. Decades on, I am still interested in the  possibilities of alternative spaces for sharing knowledge, ideas and interpretations, and where we might find contemporary equivalents of the teach-in.

Alternative spaces are often temporary. Vulnerable. Sometimes they are ambivalent, more than one thing at the same time. Nevertheless they are a place where analysis combined with guarded optimism can generate and sustain life-lines of thinking and acting differently. While I can now muster fancy theory to explain the existence of ‘counter time-spaces’ and their necessity, it is still their potential that interests me most.

Like many others, I once saw possibilities in social media for support and nurturing of diverse alternative communities.

As a miniscule contribution to that goal, I set up this blog with the teach-in – or teach out, as these things are called today – in mind. Rather than write more books, or simply teach a few people at my own university or run a few workshops, I was interested in whether a blog could be free ‘teaching’, available anywhere, anytime, to anyone who had a web connection.

So how is that idea going then? Well, my answer to that question has changed over time. At first I was pretty optimistic.

When I set up this blog (not my first one but certainly the most long lasting) I took a lead and some heart from colleagues who seemed to use their blogs in the spirit of the teach-in/out. Like them, I opted for a non-institutional web host, paid for my own domain name, and wrote posts on the weekend. In return, my institution steadfastly refused/refuses to recognise the blog as workload and also saw/sees it as un-auditable for impact.

I’m not too upset about employer neglect. It’s a helpful indicator that my blog is something different from my regular paid work. Just as I’d hoped. And I can also refuse any advertising for the blog, and regularly do, and I can also ignore companies offering to write generic guest posts. I’ve so far managed to keep the essay mills out of the comments too.

But the environment has changed dramatically. As has my view of social media.

Most universities were pretty slow off the social media mark. But these days universities are very conscious of social media and employ staff who take care of their twitter accounts and blogs. We academics are offered workshops in how to “do” social media and, while it is not yet compulsory, are generally expected to engage. Academic colleagues once didn’t see social media as a place to do more institutional performative work – advertise publications, build profile, big up research funding and results. But perhaps in response to institutional urging, they/we now do so in increasing numbers. Mark Carrigan discusses these changes and the ways in which academic work is framed and reframed in his book Social Media for Academics (now second edition) – I won’t attempt to repeat his analysis here; borrow or buy the book.

Suffice it to say that my idealistic goals about social media have come under serious pressure.

Twitter is now so frequently used as a vehicle for academic self-promotion that it may be pretty difficult for my few weekly tweets about new blog posts to be anything other than profile-building. Depressing. But what’s worse is that, as part of a hyper-linked hyped-up ecology any blog, including mine, can seem less like a teach-in and more like just another part of an individualised competitive academic economy.

Oh yes, and I am also now seen by my institution as an academic social media “influencer” and invited to support university promotion campaigns organised through the marketing department. I’ll leave it to you to work out how I feel about that.

The current UCU strike #digitalpicketline has seen a decline in the volume of self-marketing and it is a reminder of the more positive aspects of social media. The respite from me, me and more me signals how productive it would be to think again about ‘good’ academic uses of social media.

Do ‘we’ still see any possibilities in social media for different and alternative conversations, for the development of digital teach-ins?

Is the socmed space now so resolutely framed as a scholarly bazaar that anything we might try to do other-wise morphs inevitably into retailing ourselves, hawking our publication wares, elevating our egos?

Or is it simply that social media is now, like any other alternative space, temporary and ambivalent – and to want more is simply being hopelessly utopian?

4 Responses to blog as teach-in/teach-out