This week there are five posts on researching on other people’s projects. 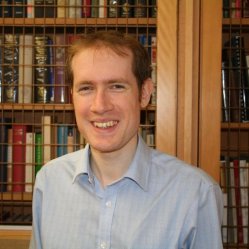 The first  is from Dr Daniel Sawyer. Daniel  is a postdoc in Oxford’s English Faculty, where he is editing a portion of the first English translation of the Bible as part of the AHRC-funded ‘Towards a New Edition of the Wycliffite Bible’ project. Daniel is interested in the history of reading, in textual criticism, and in ways in which quantitative and qualitative codicology might fruitfully be used together. He can be found on Twitter and at his website.

Hello! I’m the junior member of the team working on the ‘Towards a New Edition of the Wycliffite Bible’ project, based in the English Faculty at Oxford. We’re beginning a new edition of the first full English translation of the Bible—but, for this post’s purposes, the key thing is that I’m a researcher employed on someone else’s research project, and moreover I’m an example from a discipline in which this is a rare position. Although I think this is changing over time, in English multi-year non-PI research roles on others’ projects are relatively rare: for us the standard postdoc remains a single academic with a project which might be small but is very much their own individual creation. So sometimes when meeting people at conferences I feel like a bizarre oddity, an academic cryptid—‘Some report seeing a non-PI postdoc in English, but we’ve yet to confirm its existence’.

As Pat outlined in her invitation for guest posts from people like me, being employed on someone else’s project can be an odd place in which to find yourself just after being formally welcomed into a community of practice at your doctoral viva. This is even more the case when it’s not the norm in your field. Without pretending to know all the answers, I’ve done my best to think up a few tips for those in a similar position, or those considering applying for similar jobs.

Counting your blessings is a fine place to start. Or, in other words, I think that alongside some problems there are unique advantages to this kind of ECR job. The reward for giving up some initiative is involvement in research on a scale I wouldn’t otherwise be able to touch: much to the amusement of my friends in STEM disciplines, three people is considered quite a large team in English, and so this job is a chance to see the inside workings of a large-scale grant. In the past month alone I’ve been learning how the back-end of a digital edition is designed, and how a digital project’s interface is prototyped. In the same month, my job also sent me to Dublin to consult some unique medieval manuscripts held there. The texts I work on are about six hundred years old but the research project is a new chapter in an editorial tradition which is itself about two hundred years old. I regard being involved in this in my twenties as a bit of a privilege!

Work as a non-PI postdoc can sometimes offer an extra layer of support and backup, though from what I hear this is far from universal. I’ve been lucky: my colleagues are brilliant in their own work, very encouraging, and determined that their postdoc should get something out of his job. But even less committed co-workers still represent something better than a hard cliff-edge drop away from close work with a supervisor during the PhD.

So I think there’s value in looking for the unique opportunities and benefits we have. However, though these positive sides might be all very well, even the nicest ‘hired gun’ researcher job will have its challenges. What else might you want to do?

Where possible, it’s good to assume full responsibility for some specific facet of the larger project, and (from what I’ve seen, at least) a lot of grant proposals now have this role for the postdoc(s) explicitly included. So, as part of our research, I’m writing a single-author article about the specific part of the Wycliffite Bible which I’ve been editing. My PI and I have also successfully collaborated to bid for some additional funding which will bring on one more staff member for one year, and I count as a co-investigator on that subordinate project. Working out spaces within which you can exercise more initiative like this must be a matter for negotiation with your PI, and what’s possible must vary considerably from project to project, but it’s something worth raising and discussing.

I think it’s entirely legitimate to have side projects: your salary might buy the lion’s share of your time but it doesn’t buy your every waking moment. If your research doesn’t require expensive equipment access you can, without cheating your employer, carve out an hour here or there in which to work on something—perhaps articles which will spool up your own research project applications after your current job.

It’s also wise to maintain links outside your project and its topic. The English Faculty here requires postdocs to have a formal mentor other than their line manager, but you can seek out sympathetic external ears informally too. Additionally, while it’s great to know more senior people who can offer advice, I’ve found getting to know other postdocs helpful. Peers can be a great source of practical tips (especially if you’ve moved institutions for your new role) and if like me you don’t know many others like yourself within your own discipline, it’s interesting to compare notes with people from team projects elsewhere in the university.

Finally, on the topic of academic identity, I think it’s worth maintaining some perspective. It’s quite true that after the triumphant feeling of a finished doctorate it can feel strange to find yourself furthering someone else’s grand design. But we non-PI researchers aren’t footsoldiers, we’re specialists. We’ve convinced other, more experienced scholars to pay us for our skills and that is, I think, not a meaningless or worthless achievement. I remind myself, too, that no research emerges from a vacuum: even the most original and surprising solo scholarship rises out of a web of suggestions from colleagues, demands from reviewers and past years of training with others.

I’ve been in this job for less than a year, so I’m still learning a lot of postdoc survival techniques myself. I’m conscious, too, that alongside to many jobs out there my own is still relatively stable and high-profile. I’d also be interested to hear from the comments how all this works in other fields where people like me are more common!

Pat Thomson is Professor of Education in the School of Education, The University of Nottingham, UK
View all posts by pat thomson →
This entry was posted in Uncategorized. Bookmark the permalink.