we need to talk about Zoom

This is a guest post from Mark Carrigan who works as postdoctoral research fellow in the Faculty of Education, University of Cambridge. 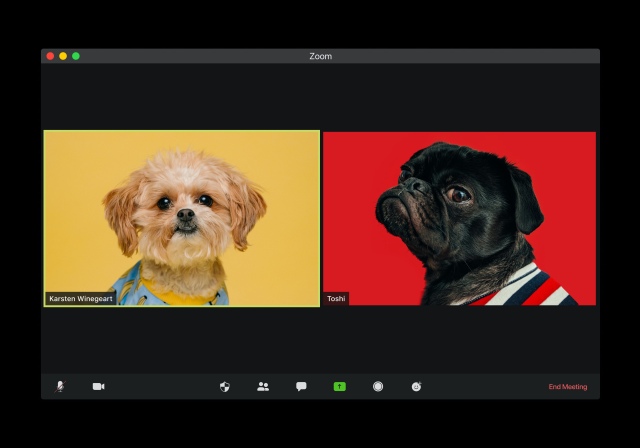 There’s a peculiar kind of exhaustion which comes from spending an afternoon staring at Zoom. I’m mentally drained but I would be if I’d spent a few hours in face to face meetings. My back hurts but it probably would have after a long meeting in an uncomfortable chair. I’ve got a vague headache but that’s probably from a few hours without hydration, as oddly I’m less likely to remember to bring water with me in my own house than I am when at work.

It’s hard to pin down why Zoom, which I’m using here to stand for video conferencing in general, is more tiring than meeting in person but I’m increasingly convinced it is. It combines all the familiar ailments which develop from meetings but with a unique piquancy that makes the ensuing suffering more than the sum of its parts. I’ve just finished another two hour Zoom meeting earlier which could have easily been reduced to an hour. If you were in this meeting with me, I hope you don’t take this as a complaint directed at you because it truly isn’t. But it is a plea that we urgently begin to talk about how we handle video conferencing as a routine part of life. Once the meeting was over I rushed outside into the sun with a sense of urgency I’ve rarely felt after face to face meetings, walking my way back into feeling ok again before deciding I needed to write this post.

These meetings have suddenly become routine features of our daily work as we adapt to the unnerving normality which is the twilight world of lockdown, once we’ve packed up our offices and forced ourselves into a routine of working from home. It’s strange therefore that I can’t recall being party to more than a few conversations about how these meetings differ from the ones we used to have in the olden days, if you can recall our former times when we met with coffee and snacks and bad sandwiches in the world beyond our living room.

The obvious shift in our behaviour would seem to warrant discussion about how we should approach this new way of interacting, what structures we should use and what we should expect from each other. Perhaps this lack of reflection is inevitable as we’ve all been struggling to make the transition into remote work, leaving us with little time or energy to reflect on how we’re doing this. I feel we urgently need to begin this conversation though, not least of all because I’m not sure how many more two hour Zoom meetings I can cope with.

Overly long meetings are at the top of my litany of private Zoom grievances. In part because I’m working at my kitchen table, sitting in a chair which leaves my back aching if I’m sedentary for more than half an hour. But there are many other issues which I can’t be alone in being increasingly bothered by. What about the unbearable cacophony of an unmoderated Zoom meeting with multiple people vying for attention? Or the uncertainty about the point at which glancing at your e-mail goes from being an unavoidable feature of the working day to being rude to the person you’re talking to? Or the fact it feels awkward to ask to simply do a voice call when everyone assumes video is the default?

Can we make clear to each other that it’s ok to get up and walk around during meetings? Or mute the microphone and video if a family interaction needs to take precedence? Perhaps we could come to an agreement about the appropriate etiquette for leaving a meeting early? I’m sure I can’t be the only person torn between not wanting to interrupt a conversation in full flow and feeling a chat message is insufficient explanation for a sudden departure. There’s also the question of how we plan meetings, with Zoom making it easier to hold spontaneous gatherings that might serve a useful purpose and help short circuit what could otherwise turn into an endless e-mail thread over many days. However when we’re struggling to find a rhythm in our work, particularly if our circumstances mean we can’t work without interruption, invitations to meet in the next few hours, if not now, are unlikely to be welcome. They can be difficult to refuse though, particularly if the person extending the invitation is in charge, in the multiple forms that can take within the relatively informal working environments of the academy.

It’s important we create the space in which we can talk about the issues we are all facing. I worry that if we don’t we will institutionalise Zoom, in other words establish ways of doing video conferencing, which will be hard to shift even if we all hate them. Whereas this moment of upheaval when we’re all having to think through how we approach the mundane reality of our work, at least makes it easier to have these conversations than it would otherwise be.

In part this is a matter of establishing mutual expectations, even an etiquette. But we could also see it as a broader challenge of creating practices which are inclusive and effective. For example Dyi Huijg, convenor of the Neurodiversity Reading Group, uses the ‘raise hands’ method and written chat to ensure that everyone feels comfortable contributing, asking participants to mute their microphones until the administrator unmutes them after raising their hand. My colleague Jana Bacevic uses a similar approach in the self-isolation reading group she is convening within our research cluster. Once you’ve participated in meetings which work like this, it can be difficult to go back to the cacophony of people talking over each other.

If we encounter what feels like a great way of managing the problems of Zoom, we should talk about why it works and if it works for everyone. We should share the difficulties we’re experiencing with Zoom becoming a regular part of our working life. Perhaps mostly importantly we should all do whatever we can to avoid inflicting two hour Zoom meetings on each other.

Photo by Tobias Seward on Unsplash

7 Responses to we need to talk about Zoom