I recently bought a fountain pen. I’m not sure why, as it was expensive, and I don’t seem to have a lot of call for such a pen.

Now, it’s not that I don’t write by hand. I do. A lot. As an ethnographer I am always taking notes when I’m “in the field”. However, I usually use a biro, or sometimes a pencil or two. I’m quite fussy about the biros and pencils; I like them to have a certain weight. I don’t like a writing instrument that feels as if it might blow away. I want something solid in my hand.

If I’m going to sketch something, which I also often do in ethnographic research, I like to have a black ink pen handy – you know, the kind that leaks when you’re on a plane. I’ve often mistakenly left a black ink pen in my bag and then covered myself in a hard-to-wash-off inky mess when I next take the lid off. Maybe that’s happened to you too. 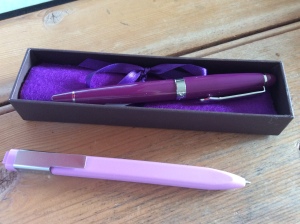 Like a lot of people I keep handwritten notes of meetings in a diary-style notebook. There are generally lots of ‘to do’ lists in those books, often with far too little crossing out as things actually do/don’t get done… But I wouldn’t use a fountain pen for this kind of meeting work. Too pretentious perhaps, or just too easy to lose the pen!

I’m really not sure why I bought this particular fountain pen and at this time. Some kind of nostalgia, perhaps, for an era when I used to write most things by hand?

I’ve been musing recently on how writing may have changed with the advent of the computer. I don’t mean just the act of typing, but the actual processes of composition. Although I’m a planner, I think that I planned a lot more when I wrote by hand and then typed up the nearly final version. It’s so easy with a computer to cut and paste, to remove things and to re-order.

I can remember going into a creative writing class to show students my own hand-written version of cut and paste… it was not unusual for me, pre computer days, to physically cut up a text and stick it back together with tape. So my manuscripts not only had pages with lots of scribbled insertions, arrows and crossing out, but they also usually only hung together thanks to Richard Drew (he invented Scotch tape). The students were often amazed at the amount of revision that went on before the final copy was typed – and that of course was the point I wanted to make. 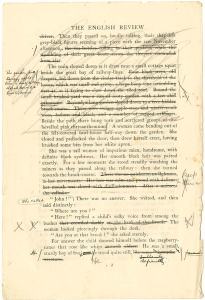 I too am often amazed by the amount of revision that some writers do. I am particularly interested in the way that some writers kept revising and revising their galley proofs. D H Lawrence for example, treated his galley proofs as if they were simply the next version of the story for him to work on. I can only imagine what his publisher thought of the expense of having to typeset and then re-typeset and then re-typeset again.

(See the full text and more about Lawrence and the writing/production of the story The Odour of Chrysanthemums here.)

But I don’t have someone else to type out my manuscripts, I must do this myself. And academic writers are not given the luxury of making substantive changes to their manuscripts after they are set. We have to keep changes to a minimum. So we are accustomed to having to get our revisions done before we submit our work. And writing on a computer does in fact save one of the steps – rather than write by hand and then type, we type and can revise much more easily on a computer, we don’t have to redo the entire manuscript each time.

Perhaps then this is not why I bought the pen.

The anthropologist Tim Ingold suggests that writing by hand is a ‘making’ similar to playing an instrument, or crafting an object (Ingold, 2007). Hand writing requires more of the body than simply typing. It has a physicality which requires

“… continuous flowing gestures not a sequence of discrete letters.
In a cursive script the line, as it unravels upon the page, issues directly from this gestural movement, with all the care, feeling and devotion that goes into it. I compare it to practising my cello. When I practise – which I do as often as I can – the sound pours out from the contact between bow and strings. In just the same way, handwriting flows from the moving point of contact between pen and paper. The keyboard ruptures this connection. The tapping of my fingers on the keys bears no relation to the marks that appear on the page or screen. These marks carry no trace of movement or feeling. They are cold and expressionless. Typing on the computer, I find, is joyless and soul-destroying. It rips the heart out of writing.” (Ingold on handwriting)

Ingold says that he encourages his students to write by hand in order to reawaken a sense of personal involvement in authoring which, he suggests, can lead to different and often profound insights. There’s a pleasure arising from the act of writing itself, rather than just from the production of text.

Maybe it is the act of writing itself that I want to get back to. I used to like handwriting as a child. I enjoyed the aesthetics of a neatly written page, and the pleasures of copying out texts I liked. Maybe this is what I want to try to recreate.

As yet, I don’t know. My new fountain pen sits in its box, waiting for me to discover what use I have for it. We will see.

PS. If you too want to wonder about when to use a fountain pen like mine, and can afford this luxury, then they are sold online.

11 Responses to a new pen